I was talking to my daughter last Sunday night about Moses. This is a way she procrastinates on going to sleep: by asking me about my sermon or other religious matters. When I mentioned Moses’ wife, she was indignant. Why did she never know before that he had a wife? What do we know about her? Does Moses ever have a conversation with her or does he just converse with God?  Did he take her to Egypt and put her in harm’s way? I had to say that there isn’t much about her in the Bible, which is mostly silent on women’s lives.  Its sexism annoys her. You can be sure I included Zipporah in the Passover story we’ll tell the kids this Sunday. 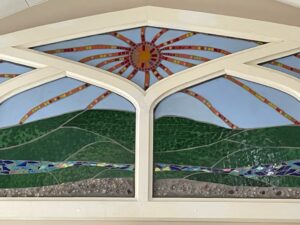 The ancient stories of Moses and Jesus- who was considered the “new Moses” by some of his people- are freedom stories.  In them, political and religious/spiritual freedom are tied together.  In one, the evil empire was Egypt. In the other, the evil empire was Rome. In both stories, there is a sense that there was no way to win against these huge and monstrous evil empires… and yet God did a new thing and helped shift the power to those most oppressed.

Hope to see you at the Meeting House or on the Zoom screen. Yours, in freedom,

P.S. We will be having a simplified coffee hour in Parish Hall this week. If any of you thought about your “wake up calls” after Sunday’s sermon and would like to share them with me, that’s the sort of conversation (or email) that I really enjoy!

Tacking Into the Wind

Read More about Tacking Into the Wind
Minister’s Message