Skip to content
Home / News / Category: Around the Community / A Remembrance Story

4+ years ago North Parish was contacted by Drew Armstrong, a tax accountant living with his wife Tina in Colorado, about the possibility of placing a headstone in the Second Burying Ground. His quest was to complete the unfilled wish to honor his great-great-grandmother and her infant son.

In 1847 the mother and child had immigrated from Scotland to join their husband/father, living in North Andover, and working in one of the wool carding mills. The infant died on the day they arrived; the mother died 2 weeks later.Drew originally contacted the North Andover Historical Society. Inga Larson (now Laakso), archivist at that time, found Town records indicating that the burial did take place in the Second Burying Grounds, which in 1847, were under the care of the North Parish.Family lore tells that the father/husband did not have enough money to pay for a headstone so, like many others, they were buried in an unmarked grave. The husband later moved to Wisconsin for a better job, remarried, and pledged that, when he was financially able, he and his new wife would return to have a headstone installed.Time passed – through initial contacts with North Parish, the husband/father learned that the sexton (who handled burials) had died, and no one knew the exact location where the mother and child had been buried. Sometime later he and his wife both died – the issue remained incomplete until Drew’s investigation into family genealogy uncovered the story.In March of 2018 Drew contacted our office administrator, Stephanie, who forwarded his letter to Debb Putnam, liaison to the Cemetery team. She discussed it with team member Kathy Stevens, Rev. Lee, and the Board Chair. We were all in agreement and gave Drew the OK. Minxie and Jim Fannin (who were doing headstone restoration work for us) passed along two referrals for carvers who could do a historically appropriate marker. In gratitude, Drew donated to the North Parish Cemetery Fund.Time passed, again – Drew worked with his chosen carver, Karin Sprague of Rhode Island, on the headstone proposal, review, and creation; COVID restrictions on gatherings and travel postponed plans for a family gathering; North Parish passed the cemetery ownership to Ridgewood (with a confirmation that they would honor this installation).Finally, this summer, Drew contacted Debb and the Ridgewood staff to say they were ready to install. After assuming ownership of the cemetery, Ridgewood had done work with ground penetrating radar that enabled them to suggest a site for the headstone placement.These photos from the day – Karin, in the blue T-shirt, designed and carved the stone. In the last photo Drew is blessing the stone with some special water Karin brought, while she read a beautiful dedication she had written. A wish fulfilled. 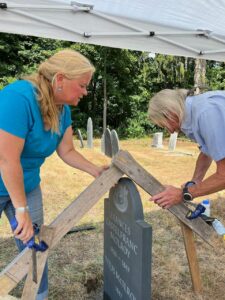 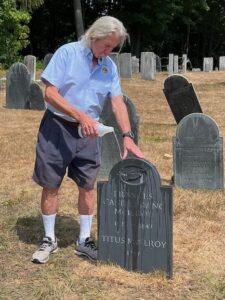 Light the Steeple in Celebration of a Loved One